In Manila, Philippines this October the Small Enterprise Foundation (SEF) was honored as a one of the first seven Milestone MFIs recognized by Truelift. Recognized at the Truelift Achiever milestone, SEF received the highest total score of all those assessed by Truelift for their strong model of poverty-focused microfinance in South Africa.

Over the next few weeks we will be featuring SEF in a series of blog posts in order to learn more about their journey. In this series we will be presenting:

Please join us in learning from SEF’s work. Feel free to leave any thoughts you have in the comments section below, or send us an email at info@truelift.org.

In this first post in the series, we talk a bit about SEF’s context in South Africa and outline their successful model of poverty-focused microfinance.

At the southern tip of the continent of Africa, South Africa is over 1.2 million square kilometers in area, ranking it the 25th largest country on the planet. South Africa completely surrounds Lesotho and almost all of Swaziland, also sharing borders with Botswana, Mozambique, Namibia, and Zimbabwe. 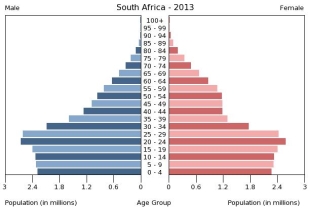 With a constitution developed under Nelson Mandela in 1996, South African government leadership has remained under the African National Congress (ANC) through the current President, Jacob Zuma.[ii] South Africa will celebrate the 20th Anniversary of its transition from apartheid to democracy on “Freedom Day”, 27 April 2014. The elections to take place in 2014 will also be the first in which those born after the end of apartheid  – know as “born-frees” – will be eligible to vote. Former head of the ANC Youth League, Julius Malema, has a formed new political party, the Economic Freedom Fighters, which explicitly appeals to younger voters “struggling to find work in an economy where almost half of them have no formal job, and where the education system is lagging behind much of Africa.”[iii]

As the largest economy in Sub-Saharan Africa, South Africa’s primarily service sector economy boasts steady GDP growth since 1993 at around 3%, excluding some negative rates seen in 2009.[iv] Each sector contributes to GDP in the following percentages of total GDP:  services 68.1%, industry 29.3%, agriculture 2.6% (2012 est.) Agricultural products include corn, wheat, sugarcane, fruits and vegetables, as well as beef, poultry, mutton, wool and dairy products. South Africa has a thriving mining sector and is a leading producer of platinum, gold and chromium.

Overall, South Africa is an upper-middle income country in terms of GDP per capita, but the legacy of apartheid has also left stark distortions in terms of wealth distribution and opportunity; South Africa currently has one of the highest levels of income inequality in the world.

The Small Enterprise Foundation (SEF), established in 1991, works towards the elimination of poverty and unemployment by providing microfinance services for business use to poor and very poor women. Using a Grameen-inspired lending methodology, where groups of women guarantee each other’s loans and come together at a center, SEF works in four of the poorest provinces in South Africa. While consumer lending to salaried workers in South Africa is substantial, SEF is the leading example of poverty-focused micro-enterprise finance in the country and has almost an entirely female client base.

SEF founders built the organization on a mission to target poor and very poor people in South Africa. In 1995, following an evaluation revealing that very few of their clients were living below 50% of the national poverty line, SEF redesigned its methodology to launch a new Tšhomišano, or “working together,” Credit Program (TCP).  This program was designed solely for women and strictly to target very poor clients.

South Africa presents quite a difficult economic environment, resulting in high operational costs for SEF and other microfinance practitioners. The TCP program, however, has actually showed improved performance on both financial and social bottom lines due to better repayment rates, client loyalty and group discipline in the program. In 2004, SEF began to expand the poverty-focused TCP program and at present, SEF quite effectively balances financial performance and excellent portfolio quality with targeted poverty outreach and innovative social monitoring mechanisms.

TCP targets exclusively women designated as “vulnerable” who lack a reliable source of income. In terms of depth of outreach, an estimated 77% of SEF clients live with incomes below US$2 a day at purchasing power parity, and 52% below US1$ a day. National incidence compares at ~30% below US$2 a day and 11% below US1$ a day. Thus the poverty gap for SEF, or the difference between percentage of clients and percentage of national population below certain poverty lines, is quite large for SEF using both of the above measures of poverty.

To measure poverty levels, SEF initially developed the participatory wealth ranking (PWR) to target those judged to be most in need, according to local understandings of poverty. More recently SEF has adopted Grameen’s Progress out of Poverty Index (PPI), which is discussed later on in this post. Loan officers collect poverty level data on enrolled clients at the moment of entry into a new village or community. This data is then entered into the MIS and used to monitor poverty levels on all incoming clients.

Services that Meet the Needs of People Living in Poverty

Guided by deliberate intent and strategy to effectively serve poor clients, SEF has made great strides towards understanding the needs of people living in poverty. They have invested heavily in staff training and information systems that allow monitoring of both how clients use services, and whether or not their lives are improving as a result.

Some characteristics of loan options for clients include customized loan period, number of installments, and loan size, all tailored to the needs of the client through a business evaluation and verification process. While this flexibility is limited by the need to keep administrative and management systems simple and affordable, transposing their pro-poor mission onto everyday practice through operational guidelines and SMART objectives enables SEF to continue to perform well on their double-bottom line.

SEF’s TCP model includes a variety of other checks and services for clients, including performing vulnerable client visits, business evaluations, progress meetings with groups, loan utilization checks, problem-solving sessions following center meetings, center trainings on debt, savings, and business skills, and more. While SEF does not provide savings services, their model does require client groups deposit into a formal bank account, such as a Post Office Savings Account. SEF has no direct control of or access to the group savings and the funds accumulated offer important support to clients when unexpected financial shocks arise, such as marriage, illness, death in the family, and so on.

SEF’s model offers added-value for clients living in poverty while at the same time making the staff’s work more efficient. Vulnerable client indicators have been reliably used by SEF for many years to identify potential problems among clients. By coordinating client-led skills development discussions and monitoring of vulnerable clients, SEF offers support to clients who need it most while staying in touch with important indicators, such as weak businesses, poor savings or poor attendance, and loan payment arrears.

As SEFs poverty-focused TCP model offers only one option to poor clients, one could argue that they lack a diversity of products and services compared with other poverty-focused MFIs. SEF has found varying degrees of success when experimenting with new products and services. For example, when developing a new microinsurance product SEF experienced serious operational challenges and were not able to undergo full-scale implementation. In their two current credit programs, however, SEF has found ways to provide value-add services such as financial education to many clients, and they continue to seek ways to improve their services while balancing social and financial returns.

Progression along the pro-poor principles is a step-by-step process, beginning with intent and strategy, moving into design and implementation, looking at results achieved to inform adjustments and new practices – and then beginning the cycle over again. Looking at a long-term strategy in developing a pro-poor microfinance model will improve any organizations chances of success in reaching and serving poor clients.

SEF is one of very few MFIs that has invested heavily in tracking change in the lives of their poor clients – which is one of the reasons they received such high Achiever level recognition from Truelift. Intitially, SEF developed the Participatory Wealth Ranking (PWR) to measure poverty levels of incoming clients. As the organization grew, the need to aggregate branch data and benchmark to national and international poverty measures prompted a change in the tool used.

SEF currently uses the Progress Out of Poverty Index, a poverty measurement tool developed by Grameen Foundation and used today in more than 45 countries, to understand clients’ poverty conditions and changes to those conditions over time. The PPI is statistically-sound, yet simple to use: the answers to a set of questions about a household’s characteristics and asset ownership are scored (using a model that is linked to Statistics South Africa’s Income and Expenditure Report) to compute the likelihood that the household is living below the poverty line. With the PPI, SEF can identify the clients who are most likely to be poor or vulnerable to poverty, and integrate objective poverty data into assessments and strategic decision-making. In 2013, SEF received Advanced Certification from the Grameen Bank for its use of the PPI.

The PPI has to-date been rolled out in all but 6 of SEF’s branches. Beginning in 2012, SEF staff were trained on proper use of the tool in order to administer PPI surveys to all new clients and assure quality and consistency of the data through the work of quality assurance officers and operations managers. SEF analyses PPI data by product and by region, among other variables, to best understand its clientele as well as its impact.  SEF staff returns to collect PPI data for these same clients over time, and is therefore able to understand changes in clients’ poverty profiles over time. As this tool is still finishing the implementation phase of their use of the PPI, they look forward to seeing significant findings on changes in their clients well-being in the coming years.

WHAT MORE CAN WE LEARN FROM SEF? 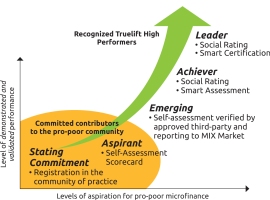 Follow along as our series continues to learn about SEF’s experience with the Truelift Assessment process and their plans for progressing in poverty-focused microfinance practice. For additional information on the SEF model, take a look at the full case study from 2007 (followed-up in 2009) conducted by Imp-ACT Consortium.

Read the second and third posts in this series:

Feel free to leave your thoughts in the comments section below, or email us at info[@]truelift.org.

Help us Create a Learning Environment that leads to positive and enduring change for people living in poverty.